Determine whether the objects in the following problems have kinetic or potential energy.

Then choose the correct formula to use:

2. A baby carriage is sitting at the top of a hill that is 21 m high. The carriage with the baby weighs 12 N. The carriage has ____ energy. Calculate it.

8. What is the kinetic energy of a 3-kilogram ball that is rolling at 2 meters per second?

10. What is the kinetic energy of a 1-kilogram ball is thrown into the air with an initial velocity of 30 m/sec?

12. You are on roller blades on top of a small hill. Your potential energy is equal to 1,000.0 joules. The last time you checked your mass was 60.0 kilograms.

(a). What is the potential energy of the car at the beginning of the experiment before its speed is measured?

(b). Calculate the kinetic energy of the car for group A using the speed (2.5 m/sec) and mass values above.

(c). Calculate the kinetic energy of the car for group B using the speed (3.0 m/sec) and mass values above.

1. Imagine the cars were travelling in the roller coaster as shown below. Answer the questions given under the image.

• Which letter in the image possesses maximum potential energy? • Which letter represented has least kinetic energy? In which position of the diagram, the cars move with the greatest speed?

2. When the pendulum swings back and forth, it switches between potential and kinetic energy. 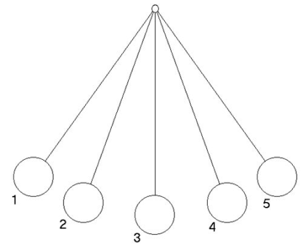 3. The diagram represents a bicyclist at the top of a hill with four points labelled W, X, Y, and Z. If the bicyclist does not apply breaks while riding down from the hill. At which point kinetic energy is closest to zero? 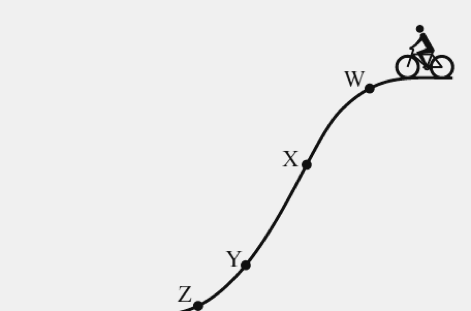